Stefan Raab (full name Stefan Konrad Raab, born on October 20, 1966 in Cologne, Germany) is a German entertainer and comedian. Stefan Raab became popular as the host of the comedy show Vivasion for the German music TV channel VIVA in 1996. Since 1999 he has hosted his own show TV total on the channel ProSieben. While TV total started as a comedy format, it soon turned into a late night show with musical performances, remotely similar to the Tonight Show with Jay Leno. Read more on Last.fm 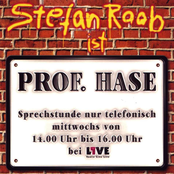